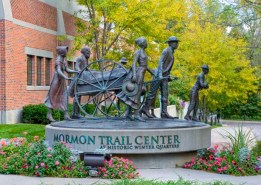 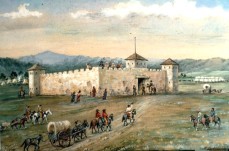 The first segment of the Mormon Pioneer journey, from Winter Quarters to Fort Laramie took six weeks, with the company arriving at the fort on June 1, 1847. 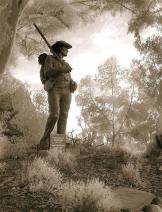 The company halted for repairs and to re-shoe the draft animals.  While at Fort Laramie, the vanguard company was joined by members of the Mormon Battalion who had been excused from service due to illness and sent to winter in Pueblo, Colorado

Also traveling in the new group were Church members from Mississippi who had taken a more southern route toward the Great Basin. At this point, the now larger company took the established Oregon Trail toward the trading post at Fort Bridger.

At a difficult crossing of the Platte, just before encountering the Sweetwater River, the company made use of their portable boat and were able to cross with comparative ease.

Seizing the opportunity to both help future travelers and increase the cash available to the migration, nine men under the direction of Thomas Grover were left behind to construct and operate a ferry at that location. Missourians and other travellers at the river paid the Saints $1.50 or more per wagon to help them cross.

During the last week of June, Sam Brannan, leader of the Mormon emigrant ship Brooklyn, met the company near Green River, Wyoming. He reported to Young about his group’s successful journey and their settlement in what is today San Francisco, California.  He urged the vanguard company to continue on to California but was unable to shift the leader’s focus away from the Great Basin.

Brigham Young met mountain man, Jim Bridger, on June 28. They discussed possible routes into the Salt Lake Valley, and the feasibility of viable settlements in the mountain valleys of the Great Basin.

Bridger was enthusiastic about settlement near Utah Lake, reporting fish, wild fruit, timber and good grazing. He told Young that local Indians raised good crops, including corn and pumpkins, but that there was ever-present danger of frost.